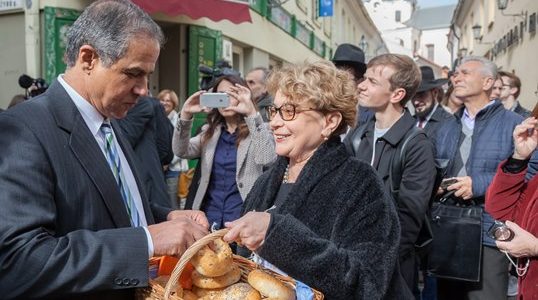 Žydų gatvė (Jewish Street, aka Yidishe Gas, aka ulica Żydowska), where the traditional Jewish quarter and the Great Synagogue of Vilnius was located, got a new sign in Yiddish and Hebrew Tuesday.

This was one in a continuing series of new signs in foreign languages, a controversial effort by Vilnius mayor Remigijus Šimašius to showcase the multicultural identity of the Lithuanian capital. Earlier signs in “minority” languages included ones for Islandijos [Iceland] street, Washington Square, Varšuvos [Warsaw] street, Rusų [Russian] street and Totorių [Tatar] street in Vilnius.

The program included a performance of a popular Jewish song by a female vocalist from the Jewish song and dance ensemble Fayerlakh about a street symbolizing warmth and hope, followed by Vytautas Mitalas, chairman of the Vilnius municipal council’s culture, education and sports committee, presenting Vilnius mayor Remigijus Šimašius.

“I congratulate the Jewish community, for whom Vilnius is becoming an ever more friendlier home. This small symbolic sign represents our hospitality, friendship, peaceableness and other values crucial for every good city. From olden times Vilnius was a noted center of traditional Jewish culture where the prewar population was 40% Jewish. Back then there was a popular saying among Jews: ‘to gain money, go to Lodz; to gain wisdom, go to Vilna.’ We must maintain and celebrate that. Wisdom and friendship are things which we can celebrate easily in our beloved Vilnius, where 98% of residents are happy with their lives,” the mayor said.

Mitalas then introduced Lithuanian Jewish Community chairwoman Faina Kukliansky, who also spoke briefly, saying while the sign itself was small, it held great symbolic significance as Lithuania gets ready to mark September 23, the Lithuanian Day of Remembrance of the Jewish Victims of Genocide. “Today we gather to celebrate. And who would have thought that someday Žydų gatvė in Vilnius would be posted with יידישע גאס and רחוב היהודים. These inscriptions are part of our culture and of our love for Vilnius,” chairwoman Kukliansky said.

The mayor and the chairwoman unveiled the new street sign.

The historic street and a neighboring street were cleared of their mainly Jewish resident in 1941 when the Nazis and Nazi collaborators set up the Vilnius ghetto. The residents were murdered and a large population of Jews from other parts of the city were forced into the cramped quarters there. It was part of the so-called Small Ghetto in Vilnius, liquidated in October of 1942.

Žydų gatvė was the site of the Shulhof, the collection of buildings built around the location of the residence and study of the Vilna Gaon and the Great Synagogue. Historians say Jewish Street was first mentioned in 1592. Once upon a time the street bustled with small merchants going to and from the market on adjacent Glaziers’ Street.

The new Jewish street sign on Jewish Street is in Yiddish and Hebrew, both of which were spoken by Litvaks before the war. Yiddish was the daily language of most Jews in Lithuania, while Hebrew was mainly used in higher registers: sacred texts, prayer, education, religious commentaries and scholastic tractates. Ashkenazic Hebrew as spoken by Litvaks formed much of the basis for the revival of modern Hebrew, the language of Israel. Now the street sign in Hebrew will be understood by Jewish tourists from abroad, while the Yiddish inscription will serve as a source of pride and inspiration to Lithuanian Jews, 10% of whom have preserved knowledge of the Yiddish language. 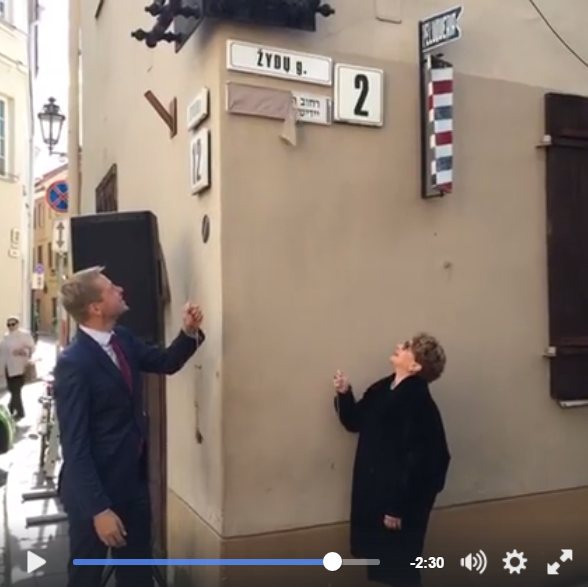