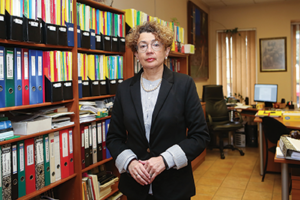 Ellen Cassedy, author of We Are Here: Memories of the Lithuanian Holocaust (ellencassedy.com), has written about the Lithuanian Jewish Community and the Bagel Shop initiative.

Amit Belaite adores the long ode to the city of Vilna that was penned by writer and poet Moyshe Kulbak 90 years ago. Lines from the poem about Vilna’s stones and streets were running through her head on a warm summer afternoon as she led a walking tour through the narrow, winding streets of the city now known as Vilnius, the capital of the small Baltic nation of Lithuania.

Belaite, 23, heads the Lithuanian Union of Jewish Students. When she posted the announcement for the group’s tour of Jewish Vilnius, she expected a couple of dozen people to be interested. To her amazement, 400 signed up, many of them non-Jews.

“People know the city is rich in Jewish history,” she said. “They feel a big need to learn about it.”

To accommodate the large number of participants, Belaite ran the tour twice. She began at the Jewish Culture and Information Center, located inside the former Vilna Ghetto, and included stops along Zydu Gatve (Jewish Street), with its distinctive old archway, and Gaon Gatve, named for the towering 18th-century rabbi known as the Vilna Gaon, who helped the city earn the moniker “the Jerusalem of the North.” Also included were commemorative plaques in both Lithuanian and Yiddish that mark the spots where Jewish publishing houses, libraries, schools, theaters and synagogues once stood.