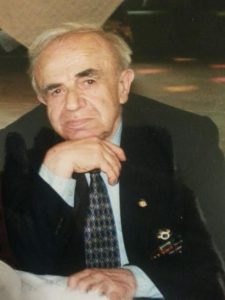 Levas Jagniatinskis and his family were active participants in the reestablishment of the Lithuanian and Vilnius Jewish Communities around the time of Lithuanian independence from the Soviet Union. In 1992 he was elected to the Community’s Council of World War II Veterans and worked with recompense, putting finances in order and organizing events with the veteran’s council and the executive board of the Lithuanian Jewish Community. Those first years were financially hard for the Community, and so he donated his car three times per week winter and summer, parking it in the courtyard of the LJC for use by the Community. He was very active in preparing documents for the Claims Conference and tried to find greater funding for the Community. His son was one of the organizers of the Community’s union of scholars, Vilnor, and later became its director. When he left, the union stopped operating. The family’s third generation, his granddaughters, began attending children’s events put on by the Community, and now, in adulthood, continue their activities, trying to mitigate the losses from the Holocaust.

At the present time Jagniatinskis is the last working Jewish war veteran council member, as their ranks thin quickly for obvious reasons and other veterans leave. On June 29 he celebrated his 90th birthday. He says progress in medicine is responsible for his longevity as well as the care and concern of his family and the Community. The Social Center team has helped him feel better following a heart operation and a subsequent long convalescence at home. His powers are returning more quickly thanks to attentive and good-hearted caregivers, whose love and understanding make overcoming all obstacles possible. This support around him allows him to carry on his everyday routine and lifestyle. While Jagniatinskis is accustomed to living alone, his doctors tell him he shouldn’t walk by himself, so every day members of the family visit him.

Now looking back from the impressive age of 90, Jagniatinskis says: “When I think about the road I took in life, I can say that an active lifestyle and social service was the right choice, beneficial both to me and to the Lithuanian Jewish Community.”