The old Jewish cemetery in on Sinagogų street in Klaipėda has been given legal protection, the Culture Heritage Department under the Ministry of Culture reports.

Although there used to be several dozen cemeteries in Klaipėda, only a few survive. “The only Jewish cemetery in the city is the one from the early 19th to mid-20th century period. It used to be bigger than what has survived and listed on the registry of cultural treasures. It’s now about 13,000 square meters. But what has survived obviously enriches the history of the city of Klaipėda and is an important part of the city,” Audronė Puzonienienė, director of the Klaipėda office of the Cultural Heritage Department, said.

Puzonienienė cited Jonas Tatoris’s book “Senoji Klaipėda. Urbanistinė raida ir architektūra iki 1939 m.” [“Old Klaipėda. Urban Development and Architecture till 1939”] as the richest source of information about the old Jewish cemetery in the Lithuanian port town formerly known as Memel. The author of that book says there were 22 cemeteries in Memel/Klaipėda in the period from the 16th century to the early 20th century. At the beginning of the 19th century a ravelin—part of the earthen fortification for the defense of the port city— was allocated for the Jewish cemetery. The Jewish cemetery first appears on the city map in 1840, as a still rather small area surrounded by hedgerows. It was enlarged in the early 20th century. “The layout of the Jewish cemetery was different from the Lutheran cemetery: it didn’t have a central square and intersecting paths, and the territory was divided up into rectangular blocks,” Tatoris says.

The list of cultural treasures to be protected at the old Jewish cemetery in Klaipėda includes many small landscaping architecture objects and visual arts forms: a pink speckled granite grave monument with an inscription in Hebrew [letters], a gray speckled granite headstone (overturned) and fragments of about 30 headstones used to create a commemorative wall. The architect Saulius Manomaitis set up commemorative wall ca. 1991. The ground and surface elements are also protected, including graves and human remains, and the surface topography. It is flat with a few solitary trees. A row of cedars (Thuja) is planted in the central area. 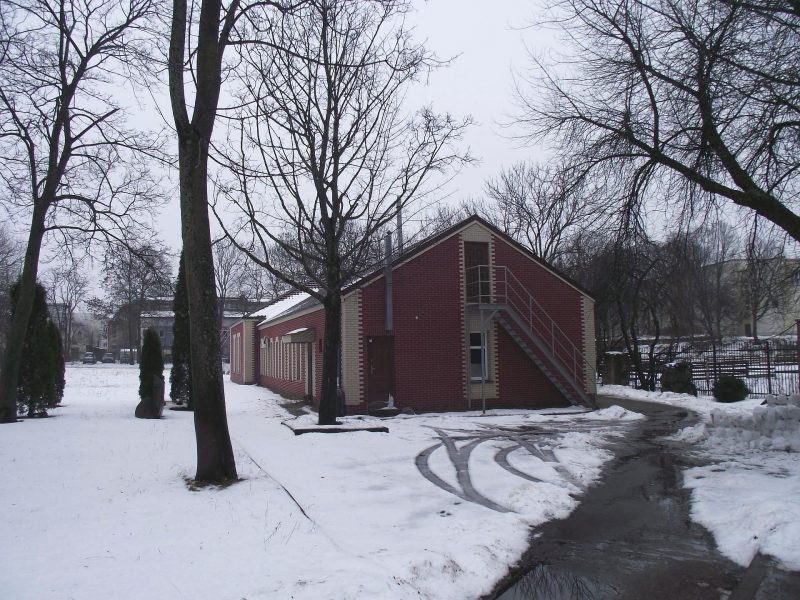 In the mid-19th century a fence was set up around the cemetery and a ritualistic building was built. In the early 20th century the western and southern sides of the cemetery were bounded by trees while the northern and eastern sides were defined by the slopes of the ravelin, which were level in the post-war period. It is now surrounded by residential houses. The ritualistic building was relocated to where it is now. It was originally a square building without additions. An addition was added and is recorded on the 1942 city map. This map is conserved in a military archive in London. The building had space for holding funerals and a shop selling funereal goods. The headstones and the building were destroyed during World War II. After the war the Jewish cemetery became a Soviet radio jamming station with tall antenna towers and an administrative building in the place where the ritualistic building had stood. Almost all of the headstones were destroyed, and some were used as construction material for building bases for the antennae. Following Lithuanian independence from the Soviet Union in 1990, the jamming station was closed down and the cemetery territory was fenced. Surviving fragments of memorial slabs were mortared together to form the commemorative wall. The administrative building of the radio jamming operation became the headquarters of the Klaipėda Jewish Community and there is a synagogue operating there. The alley of cedars was planted to honor the residents of Memelland who risked their lives to rescue Jews from the Holocaust. Each of the 29 trees features a memorial sign with the name of a Righteous Gentile.

It is believed Jews settled in Memelland in the 15th century, although the first date in the written sources is April 20,1567. That was when Albrecht (Albert, 1490-1568), duke of Prussia, last grand master of the Teutonic Knights, gave the Jews 21 days to quit the city and never return. The ban lasted until the mid-17th century. Even after it was lifted, Jewish settlement in Memel was strictly controlled and limited. 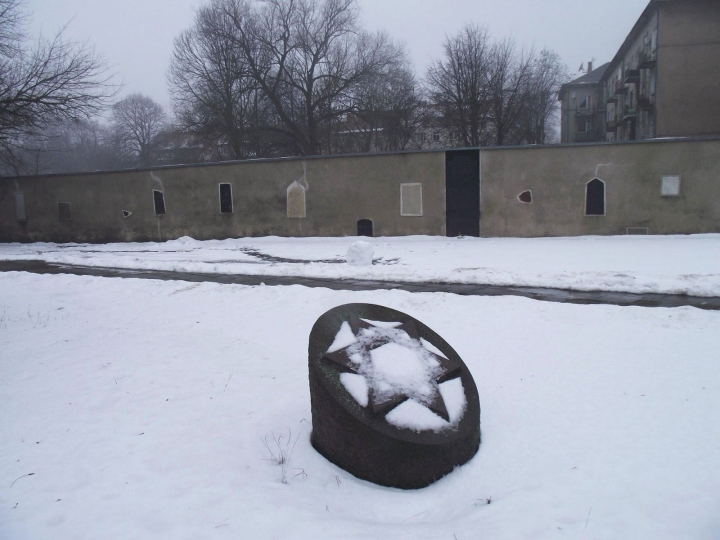 The situation only really changed a century later. The French Revolution granted equal rights to Jews of France. This revolutionary innovation spread to the countries conquered by Napoleon and partially survived even after Napoleon was toppled. The favorable situation of Memel as a large port which doesn’t freeze over in winter and a favorable turn of events (the Crimean War, which isolated Russia from the normal trade routes) led to a marked increase in the number of Jewish residents: from 45 people in 1813, to 887 people in 1867, to 1,214 people by 1880. France took over administration of Memel as an Entente protectorate following Germany’s defeat in World War I and annulled all restrictions on Jews. The Jewish population continued to grow after the city became part of Lithuania and was rechristened Klaipėda. Jews in the city founded food products, lumber, textile and ship repair enterprises. They were among the founders of the holiday business there and it’s claimed Jews started the first amber mining operation at Juodkrantė (German Schwarzort).