With deep sadness we note the passing of journalist Vytautas Mikuličius who with his parents Petras and Ona rescued Julija Remigolskytė-Flier, now a Canadian violinist, during World War II.

Petras and Ona lived with their three children at Minkovskių street no. 110 in Kaunas. Jews from the Kaunas ghetto were used as forced labor near their home, including Klara Gelman. During the winter of 1942-1943 Klara asked Ona and Petras to save her two-year-old daughter Julija. Petras and Ona took her in and raised her as their won. The little girl quickly learned to speak Lithuanian, and her foster parents told the neighbors she was the daughter of Ona’s dead sister.

Our family had many friends and acquaintances. Our mother was very involved with the women in the area especially. Russians, Jews, Poles… When the Nazis put their regime in place, mother didn’t drop her girl friends, but visits became brief and secret.

When the horrifying news reached us that children were being torn from their Jewish families and taken to be killed, mother’s friend Klara came to us with her two-year-old daughter in her arms and asked for help. Her eyes filled with tears, my mother didn’t know what to do and asked father, whose resolute “take her in” sealed the young girl’s fate.

Days of uncertainty passed. German soldiers often entered our courtyard next to the road. That made father’s advice “hold your tongue and keep quiet” a holy command to us, without further explanation required. I was given the duty of watcher. It never even entered my mind to tell even my best friends about our hidden “niece.” Railroad and other workers lived around us. Perhaps someone did notice the dark-haired little girl. But no one even mentioned it. Two-year-old Julija at our home became accustomed to it quickly, as if she sensed the danger, was very quiet and very obedient, and spoke Lithuanian.

As the front moved west, the Mikuličius family moved out of Kaunas to the home of a farmer friend of theirs in the Prienai region. The small village was much safer. Unfortunately their home in Kaunas burnt to the ground. When they returned to it they only found a pile of ashes. They also found Julija’s mother and sister waiting for them.

Although they had become very close with the little girl, they immediately gave her back to her family. Petras only lived another half-year after the war.

Julija Remigolskytė-Flier attended the M. K. Čiurlionis Art School in Vilnius and went on to the Vilnius Musical Conservatory to become an accomplished violinist. She and her mother later moved to Canada.

Yad Vashem designated Ona and Petras Mikuličius Righteous Gentiles in 1995. Julija Flier was there when Israeli ambassador Tova Herzl came to give the award to Ona in 1996. Julija said if she hadn’t been rescued, she wouldn’t have lived to have two daughters and grandchildren. 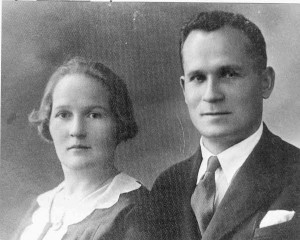 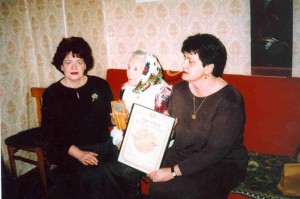 Julija Remigolskytė-Flier with her rescuer