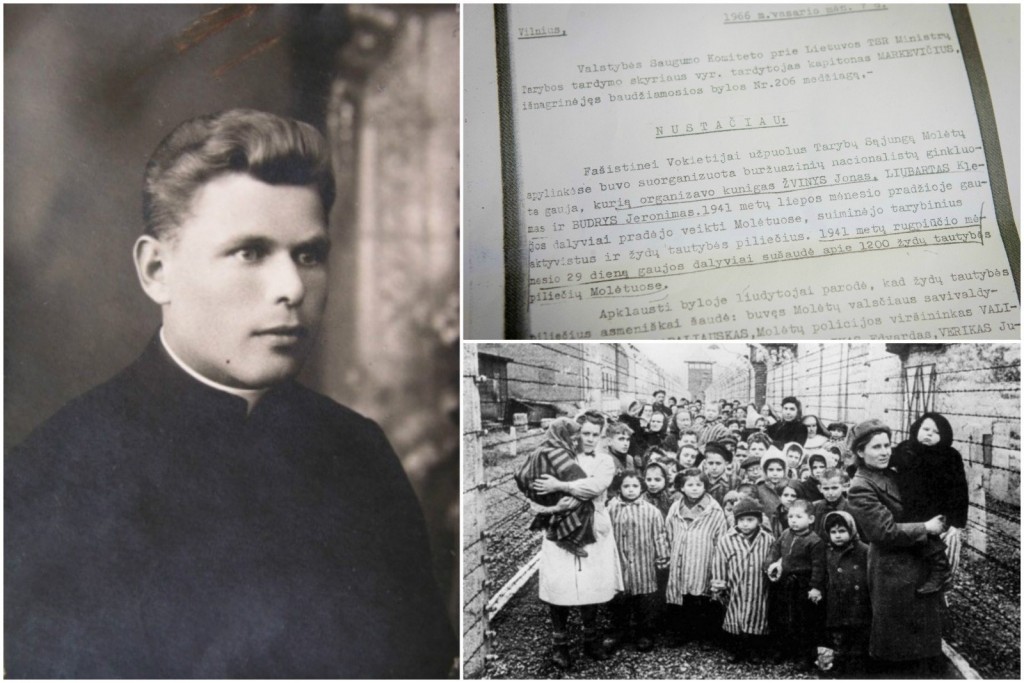 An initiative is underway in Molėtai, Lithuania, to rename part of Darbo street after the priest Jonas Žvinys, but material from the Lithuanian Special Archives casts doubt on his reputation: could he have organized the mass shooting of 1,200 Jews from Molėtai? Proponents ask how the reputation of a man given a national award by the president can even be questioned.

Local residents also have questions, but no one has approached historians for a professional opinion.

Awarded but not Checked

The Molėtai regional administration is considering whether to rename the street. The plan is to name just part of the current Darbo street after the priest, spanning only a few houses.

The explanatory note appended to the draft legislation says Žvinys was a Lithuanian volunteer soldier in 1920, the commander of partisan insurgents in the Molėtai rural district in 1941 and a recipient of the state award Knight of the Order of the Cross of Vytis.

“Studying at the Vilnius Gymnasium in the summer of 1918, he went to the front as a volunteer and fought battles against the Poles at Širvintai and Giedraičiai. He was awarded the volunteer’s medal. In 1930 Žvinys was ordained as a priest and worked as the vicar in Dubingiai from 1939 onwards. When the war began, answering the call on Kaunas Radio to rise up, he formed a large unit of armed men. They occupied Molėtai and restored the operation of [government] agencies and raised the Lithuanian flag. He was arrested in 1947 and was imprisoned for 10 years at camps in Vorkuta, Inta and Abez [Inta region, about 150 to 200 miles west of Vorkuta],” the priest’s relative Vytautas Antanas Žvinys wrote in his request to honor the memory of the priest.

President Valdas Adamkus posthumously awarded Jonas Žvinys the Order of the Cross of Vytis in 1999. The President’s Office indicated Žvinys was awarded for personal contributions and merit in the struggle for Lithuanian independence and for strengthening the national defense.

The priest was nominated for the award by the Ministry of National Defense and the application was drafted by the Center for the Study of the Genocide and Resistance of the Residents of Lithuania.

At Delfi’s request, the President’s Office said they did not have in their possession archival information showing the candidate’s past had been checked.

Local residents aren’t happy about renaming the street. Several of them have sent letters, angry their addresses would change and they’d have to change all sorts of documents over to the new address. The regional administration received a letter from Darbo street resident Saulius Tumosa opposing the move, which read in part:

“The gentleman priest Žvinys doesn’t really have all that good a reputation, contrary to what was presented in a certain book, and people remember him as despotic and brutal, and also that he was actively involved in selecting Jews for shooting, in collaboration with the Germans.”

Tumosa told Delfi he can’t go along with the initiative and wants to express his position as a member of the community. He also said it should be noted the initiative to rename the street didn’t come historians or locals, but rather from relatives occupying government posts. He also said some elderly people have testimonies regarding the priest, but are afraid to go public.

Tumosa said he read the priest’s book of memoirs and reported it was obvious Žvinys held anti-Semitic views.

“Personally I am not opposed, but the doubts need to be dispelled,” Tumosa commented.

Bubnys said he only knew Žvinys was vicar of Dubingiai during the war and was witness to the mass murder of civilian Lithuanians by the Armia Krajowa on June 23, 1944. “I think if the Molėtai administration has questions about Žvinys’s activities during the war, they could ask our center officially, or other institutions such as the Lithuanian History Institute, and we would do a study,” Bubnys told Delfi.

What sort of information do the Lithuanian Special Archives have on Žvinys? Rūta Vanagaitė, author of the book “Mūsiškiai,” quickly located Žvinys’s case file there.

A resolution dated February 7, 1966, in the criminal case file says:

“After fascist Germany attacked the Soviet Union, an armed gang of bourgeois nationalists was organized by father Jonas Žvinys, Klemas Liubartas and Jeronimas Budrys in the area around Molėtai. In early July, 1941, members of the gang began to operate in Molėtai, kidnapping Soviet activists and citizens of Jewish ethnicity. On September 29, 1941, members of the gang shot about 1,200 Jewish Soviet citizens in Molėtai.”

It goes on to list the names of people who personally shot Jews. Žvinys’s name is not among them.

Vanagaitė told Delfi she is receiving contacts from elderly people who want to share documents and information about the mass murder of Jews. One such call concerned the priest Žvinys, but Vanagaitė said she has received much more information about the priest’s brother, Bronius. He admitted to shooting Jews twice and was convicted. His testimony is also conserved at the Special Archives.

Did He Leave the Unit Before the Mass Murders?

A book called “Garažas: aukos, budeliai, stebėtojai” [Lietūkis Garage: Victims, Perpetrators, Observers] was published in Lithuanian in 2002 in which book compiler and journalist Saliamonas Vaintraubas cites the article “Masinės žudynės Lietuvos provincijoje: nusikaltimo vykdytojai” [Mass Murder in the Lithuanian Countryside: Perpetrators of the Crime]. This in turn uses Special Archives material which specifies a Juozas Žvinys, not to be confused with Jonas Žvinys, who worked as a police officer in Molėtai from 1931 on. A “J. Žvinys” is mentioned in that testimony as “priest of Molėtai”:

“At the end of June, 1941, about 100 insurgents in Molėtai formed a unit which was led by a committee. It [the committee] included the priest of Molėtai, a high school teacher, the head of the post office and the formed alderman. I presented myself to the headquarters of the insurgents on June 29. On German orders the unit of insurgents seized the Jews of the district. About 150 were seized and locked up in the synagogue. They were brutally derided and abused. The Jews cleaned toilets with their [bare] hands. In the end they shot them.”

Whether this is the same priest J. Žvinys is a question for historians to answer.

When Delfi showed the material found in the Special Archives to Bubnys, he said the priest had left the unit before the mass murder of Jews began.

“Father Žvinys was in the insurgents’ unit during the first days of the war, and as I understand it he then returned to his work and had nothing to do with the mass murder of Jews. The Jews of Molėtai were shot on August 29, 1941, i.e., several months after the uprising began,” historian Bubnys said.

Kuodytė: It Must Be Investigated Since Mistakes Were Made

“I can make the assumption the investigation in some aspects wasn’t completely finished and mistakes were made; the Genocide Center has corrected some of the mistakes, and I encourage reviewing those issues if new information comes to light,” liberal MP Dalia Kuodytė said. It was under her leadership as director that the Genocide Center drafted the application for Žvinys to receive the state award in 1999.

Kuodytė said when there were instances of some information casting suspicion a person was involved in the Holocaust, there was only one conclusion drawn and there were no attempts to hide that information. She said in Žvinys’s case an investigation should be conducted including a search for other documents and testimonies. She said documents from the KGB are a special kind of source which needs to be handled carefully and dealt with critically.

“Any sort of commemoration should be based on exhaustive research so there wouldn’t be any mistakes, but in the beginning mistakes were made. In all cases there was investigation and in many cases we did not consent, I myself did no consent to sign off on the status of military volunteer after assessing the documents. … If there is talk now about commemoration and there is even the slightest reason to think a mistake has been made, that the man might have been party to some sort of criminal activities, what should happen is the Molėtai administration should ask the Genocide Center to conduct an additional investigation,” Kuodytė recommended.

She added that the fact the President’s Office had bestowed an award upon Žvinys was completely unimportant and it would be possible to ask the President’s Office to annul that decree. She said this has happened several times before. “It’s better to correct it, to admit the mistake was made rather than to go on building statues which will have to be taken down sooner or later. My position is categorical,” Kuodytė commented.

She also recommended keeping politicians outside of the process, so that they wouldn’t exert an influence on historians in the attempt to direct research one way or another. Kuodytė said the Genocide Center has to find the strength within itself not to yield to pressure and to do its job, researching and telling the truth.

Molėtai regional administrator conservative Stasys Žvinys said no decision has been made on renaming the street yet. Currently one committee has been tasked with assessing the situation and coming up with suggestions on how to commemorate Jonas Žvinys, whether to rename the street, rename a park or not do anything.

The regional administrator pointed out there are two Knights of the Order of Vytis in the region, one being Jonas Žvinys. “It’s a very difficult question, but should we today be questioning that the President’s Office gave him this award? In bestowing the award the President’s Office should have considered the circumstances which we are discussing now,” the head of the regional government replied when asked whether Jonas Žvinys’s role in the Holocaust was known. 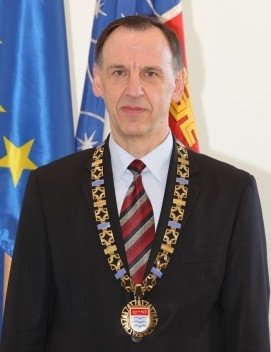 Stasys Žvinys wonders why the information now coming forward wasn’t discovered when the award was made. “There is talk, and we are considering this very carefully. This process has gone on for 4 to 5 years now and no decision has been made, and it’s not a simple matter to come to a decision. People’s opinions are truly very different, and if there is specific information somewhere that [his] actions weren’t what they should have been, then of course that causes deeper reflections,” the administrative head said.

Stasys Žvinys confirmed Jonas Žvinys was his distant relative, but said he had removed himself from the decision-making process regarding the plan and was not influencing it.

“There are active relatives who are initiating this and operating actively, relatives have sent letters to the President’s Office making complaints against me as the regional administrator, saying I’m not sufficiently engaged and don’t want to bring the process under control,” Stasys Žvinys explained.

The Presidential Chancellory’s Public Service Department’s reply to a letter from a V. A. Žvinys is also cited in the explanatory note appended to draft project to rename the street. Based on that reply, Stasys Žvinys explains he received the instruction to find a way to commemorate father Jonas Žvinys from the President’s Office itself.