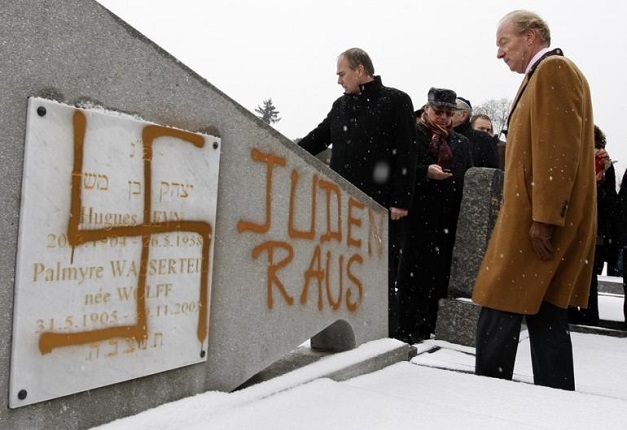 More than 59% of French people believe members of the Jewish community are at least partially responsible for anti-Semitism, according to a poll the Fondation du Judaisme Français and IPSA conducted via the internet. One-thousand and five people were queried over 9 days and were asked if they thought Jews should accept some responsibility for anti-Semitism in France.

Fifty-nine percent of those polled said yes, 3% felt Jews had severely contributed to it and 14% said they had contributed “in large part.” More than half of those questions said the Jewish people were very powerful and Jews are richer than French middle class. Thirteen percent of informants claimed there are too many Jews in France, despite statistics showing Jews account for less than one percent of the population.

The number of reports of anti-Semitic crimes in France more than doubled from 2014 to 2015. Human rights organizations caution the increase in attacks and crimes is a rising wave of violence.

Approximately 8,000 French Jews left the country last year for Israel, while many more went to Great Britain and Canada.

Board of Deputies of British Jews senior vice-president and deputy for world Jewish relief Richard Verber said: “It is troubling to consider that more than one in 10 French people believe there are ‘too many Jews’ in the country. The sad reality today is that visibly-Jewish French citizens are subject to a range of disturbing reactions, from latent anti-Semitism to acts of extreme violence, a number of which have resulted in deaths. For many, this has led to a decision that Jewish life is no longer viable in the country.

“In the UK, French Jews have been welcomed with open arms by our own community–there are two French Rabbis both Orthodox and Progressive–while the in-take at some Jewish schools is now made up of 50 percent francophone children. Throughout the Jewish Diaspora but particularly in Europe there is deep unease at the trends suggesting anti-Semitism. Governments and wider society must reinforce their commitment to supporting Jewish communities who contribute so much to wider society,” Verber said.