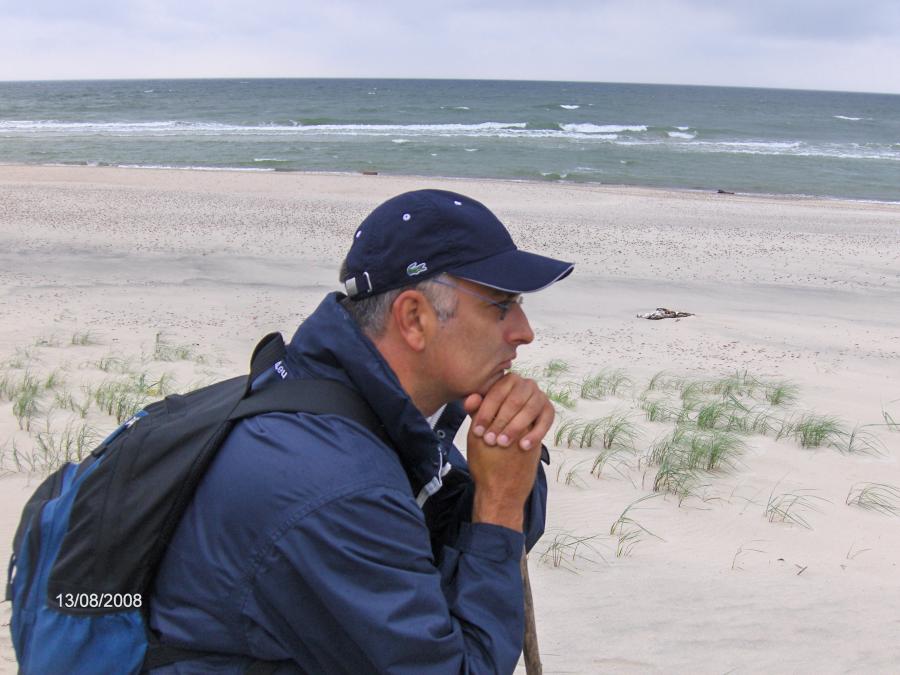 Every time an important anniversary approaches, I get uncomfortable. Even frightened. Especially when the anniversary is connected with an incalculable, perhaps incomprehensible number of victims. Frightened, because soon those who according to rank must speak, will, with the prerequisite voice of mourning. Grave words filled with bureaucratic condolences and sympathy will ring forth, then vanish in emptiness, as if a wind had blown across the frozen fields and furrows of Lithuania.

The anniversary of the liberation of the Auschwitz concentration camp approaches. There will be sorrow over the murdered Jews. At the microphones and press conferences and in the press releases. Likely there will also be some sort of produced events. With microphones, with and without red carpets. But they will be held without a doubt. Because protocol demands it. It has to happen. Perhaps now it has to happen even more urgently, because it would be uncomfortable and embarrassing if it didn’t. Not because of the Jews, God save us, no. Because of those whom we often and deservedly call civilized Europe, of which we wish to be part. After the brief and barely visible bureaucratic period of mourning a long and peaceful break will set in; there will be sorrow for the murdered Jews again when they set up microphones again at Ponar, that vacant place where even the schools are not required to visit (unless we consider mandatory the performances in the show by an organizer of public events called Being a Jew, financed with money from the EU, whose meaning is incomprehensible even to the poor school children temporarily “decorated” with kipas and Stars of David). When the March of the Living demands once per year to bow the head at that true veil of tears and again say “something appropriate.” This produced spectacle repeats itself and will repeat itself every year. Between Auschwitz and Holocaust Day (imported to Lithuania from Israel) observances, and later the Vilnius ghetto liquidation anniversaries, there will be the long intermezzos: no speeches will be necessary.

Streets will still be named after Škirpa, schools still named after General Vėtra, plaques will still commemorate the non-heroes, the Center for the Study of the Genocide and Resistance of the Residents of Lithuania will continue to issue non-sense. The cleverly-titled “Historical Report” will sit on the president’s desk, there will be sympathy and whining in the corridors of power (confidentially they will tell you: “Unfortunately, the issue is sensitive, it’s difficult to get a majority in parliament, you know that ‘they’ stand behind the political patriarch, it would be better if…”)—all the signs of a lack of political will. And at least several times during that period, as the show goes on, the actors in the main roles will appear in the foreground, for whom again there will be five minutes of official sorrow over the Jews. The parallel realities will continue to run parallel, two parallel truths which never intersect even at infinity.

The majority will obediently keep quiet. Silent, as they were THEN. A handful of free thinkers will be called agents of the Kremlin by the other side who will erroneously think that that is the end of them.

The fear of writing (or saying) what one thought in the Soviet era was called self-censorship. What should that silence of the lambs now be called? What sort of privileges will the intellectual now lose who dares say, for example, the simple truth that the reports issued by the Center for the Study of the Genocide and Resistance of the Residents of Lithuania only serve to defend the mendacious dogma of the elderly conservatives? Will he lose “moral” support? Will “admirers” of that party turn their backs on him? Will he fail to receive some sort of job in recompense, will they not order his monograph, will they not send him to some warm destination abroad? Whence does this fear of freedom stem in a free country? Sometimes I think we were the best students among the Soviets at learning how to bite our tongues. Even when it seems like there’s no place to put it from blows to the head, even then we remain silent.

I didn’t want these thoughts to be published on that anniversary. Because we must think of THAT not twice, not three times, not just five times per year. We should think about memory every day, constantly. Two weeks from now we will read that one or another high-ranking official said how sad he was for those innocent murdered Jews.

Really? Couldn’t that sorrow be channeled into practical activities? Besides just words? To build something instead of monuments to Noreika and Škirpa? To build something to replace and liberate from political slavery he Center for the Study of the Genocide and Resistance of the Residents of Lithuania? In that case fewer words would be needed. And those which were uttered would be real and sincere. Because there would be concrete actions behind those words. I don’t think I’m the only person still waiting for those concrete actions.