Usually when you hear a new Holocaust exhibit or book is being presented at the Tolerance Center of the Vilna Gaon Museum in Vilnius, you can expect a whole gaggle of diplomats and a certain number of people from that new Lithuanian elite which does understand Holocaust issues to some extent to be in heavy attendance.

Perhaps it was because it was held in the early afternoon on a Tuesday in early March, more likely it was a conscious decision to forego the pageantry and fanfare made by the director of the museum, but for whatever reason the opening ceremony for Danutė Selčinskaja’s new mobile exhibit was subdued, even somber to some extent, befitting the subject matter. There was no Californian wine awaiting toasts after the ceremony, no cheese snacks or fruit on the table in the foyer. Instead, there were about twenty apparently photocopied and hand-folded brochures laid out carefully for guests to take before or after the event.

Selčinskaja’s exhibit isn’t completely new. She is the head of the Vilna Gaon Jewish State Museum’s Rescuers and Commemoration Department, located in the same building, not really open to the public, as the museum’s History Department. This location is physically connected by several corridors with the headquarters of the Lithuanian Jewish Community at Pylimo 4 in Vilnius, and there used to be several exhibits there which were open to the public occasionally, including a Gallery of the Rescuers across the hall from Selčinskaja’s office. That room has been opened and closed several times over the last decade for different reasons, and was never really easily accessible to the average non-Lithuanian-speaking tourist or visitor in any event. This location forms one of the three–or four if you include Ponar, which is very different than the others–branches of the museum, the others being the nearby Tolerance Center and the even nearer Holocaust Exhibit at the Green House (also extremely difficult to find). The combined History and Rescuers divisions housed here are sort of the powerhouse of the entire museum, the place where much of the real work takes place, with Tolerance and Green House serving as retail outlets, as it were. Over the past several years the History Department has been slowly moving to the upstairs of the Green House and out of Pylimo 4, with about equal number of staff at both locations currently. One of the secrets of the museum is that you may enter the generally closed facility at Pylimo 4 and buy museum books and publications from the man or woman standing guard at the front desk. Some of the books are real gems, including a recent non-museum Jewish Vilna tourist guide of sites to see in Vilnius.

The name of the new mobile exhibit translates as something like “A Rescued Lithuanian Jewish Child Tells of the Shoa.” There is an “official” translation in English, because the new exhibit is completely bilingual, but the English version wasn’t really on display on March 10 during the presentation. In fact the English version of the exhibit, which Selčinskaja says is identical to the Lithuanian, is the main feature, the novelty that makes this exhibit different from its earlier incarnations under the same name. Selčinskaja says they also reworked most of the material, updated facts, fixed errors and expanded the scope of the exhibit from the earlier one of the same name which opened at the Tolerance Center in 2009 synchronously with the issuing of the large book of the same name, full of photographs of the rescued and their rescuers.

This movable version consists of a large number of what are essentially cloth or plastic posters on screens which roll out of the base, a Lithuanian version on one side and an English version on the other side of the same base. In large part the material mirrors the earlier exhibit with some expansions of the text, but the entire series of panels have a new layout and a new look.

Museum director Markas Zingeris welcomed the audience to the event and introduced Danute Selčinskaja and her work to those who were not aware of them. Assistant director Ieva Sadzevičienė played the role of ushering the correct speaker to the podium and introducing them to the audience as well. By the time it began there were still no green diplomatic license plates on the cars outside and the “highest ranking official” inside, so to speak, was Faina Kukliansky, the chair of the Lithuanian Jewish Community. Selčinskaja gave a fairly brief description of the large exhibit using overhead projections of panels, but there were so many names, of both the rescuers and the people they rescued, that it all became almost an aural blur. There was simply no way to compress so many stories and so many lives into so short a presentation, but then, the audience knew that already, because many of them had put in the time to learn the real stories over the years, or had personal connections with the murdered and the saved.

Selčinskaja during a very short summary of one panel said the surname “Kukliansky.” and I watched to see if Faina Kukliansky would respond visibly. Her father Shmuel, or Samuelis, Kukliansky, and Selčinskaja was referencing his brother, Faina’s uncle Moshe. Out of the large Kukliansky family, only four survived the Holocaust in Lithuania. One of the stands in the exhibit called “Praėjus daugeliui metų,” or “Many Years Later,” features photographs Moshe Kukliansky took with his rescuers and group portrait of the Kukliansky family on a visit from Israel. Selčinskaja made a documentary film with Moshe Kukliansky about his experience called “The Pit of Life and Torment” which can be viewed for free, Selčinskaja says, on the official website of the exhibit, http://rescuedchild.lt 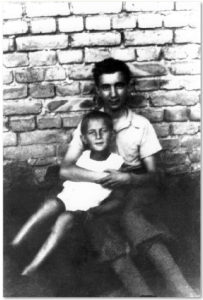 During her presentation, Selčinskaja mentioned a number of people related to people still alive and still working at both the Vilna Gaon Museum and at the Lithuanian Jewish Community. She listed the names in a private email to me after the event, and for every living person, the names of their relatives, including parents and siblings, murdered during the Holocaust in Lithuania were from four to ten times more numerous. Some of the living relatives figure in the panels, some do not because they escaped the Holocaust outside of Lithuania, but their brothers, sisters, cousins, aunts and uncles are included in the exhibit. There were survivors at the presentation that day, including Tobias Jafetas, who spoke from the podium, and Fruma Kučinskienė of Kaunas, the rescued child who was the main figure in the documentary film “Etude of Hope” released in 2007.

Sulamita Fromanaitė-Lev, who still works at the Lithuanian Jewish Community, was also there. She, her mother and grandmother were rescued by the nun Marija Rusteikaitė, the founder of the Sisters of Divine Providence monastery in Panevėžys. She was accompanied by sisters from the nunnery, with whom she is still in frequent contact. The nuns often recount the story of Lev’s family to their students.

The daughter of opera singer Kipras Petrauskas, Aušra Petrauskaitė, represented her father, who together with his wife the actress Elena Žalinkevičaitė-Petrauskienė rescued the now-famous violin player Danute Pomerancaitė-Mazurkevich who lives in the United States. Sofija Ligija “Iga” Makutenienė, the granddaughter of the famous Lithuanian rescuer Sofija Binkienė who was basically raised by her gandmother, was also there, among so many others with a direct and personal connection to the rescued and the rescuers.

Asked what was important to say about the new exhibit, author and curator Selčinskaja said: “This exhibition is dedicated to the memory of Lithuanian Jewish children killed during the Holocaust.” She also wanted the name of the designer, Jūratė Juozėnienė, “who worked so much and so sincerely and thanks to whom the stands look so wonderful,” made known. The name of the designer and others who helped make the new exhibit a success were also listed on the English version of the final panel, which Selčinskaja demonstrated when asked about the nature of the English translation. Most of the English panels were furled up, but two were on display for those willing to go behind the stands and look for them. Museum specialist Jovita Stundžiaitė was also given credit on the same panel.

Asked about the deeper significance of her work, Selčinskaja responded:  “The research work connected with discovering new instances of rescue which are carried out by the museum happens very slowly and requires much effort, because each case is studied long and carefully. The rescue of Jews during the Holocaust was first of all a moral act, a very important decision made by the individual. In the panels of this exhibit, dedicated to Jewish rescuers, we are mostly talking about rescuers whose names have long been known at least to the Jews who were rescued, [and] most of them were published in 1967 in Sofia Binkienė’s book. Even so, a large section of our society still knows very little about the rescue of Jews and the noble rescuers of Lithuanian Jews. This is not a popular topic in our society even now. Therefore our exhibit is mostly intended for students, for youth, and the first thing you’ll see is the face of the rescued child looking at you and telling you what he or she went through, about his parents, brothers and sisters who were murdered and about those people thanks to whom he survived. These are, in the final analysis, the last witnesses to the Holocaust, and it was our duty to record them, because soon there will be no one who can tell the story.”

The event coincided with the 10th anniversary of Selčinskaja’s direction of the Rescuers Department at Vilna Gaon and museum staff marked the occasion with some short addresses and bouquets of flowers. Selčinskaja remained after the event and spoke with visitors.