Sculptor, metal fabricator, painter and professor at the Telšiai (Telz) branch of the Vilnius Art Academy Romualdas Inčirauskas could truly be called a guardian of memory and tolerance activist. Radvilė Rimgailaitė, a volunteer from the Bagel Shop project to encourage tolerance, spoke with the artist about his work, traces of the history of Jews and Žemaitijans in Telšiai and the importance of communication between individuals.

How did it happen that you work mainly in Telšiai and that your work focuses so much on the history of Jews and Žemaitijans?

I was born in Anykščiai in 1950 and fnished high school there. I came to Telšiai to study art. Later after studes in Tallinn I returned to Telšiai. And permanently. I work as a teacher at the Telšiai branch of the Vilnius Art Academy. So I have been in this city for all of my conscious life. The field of my art coincides with study of the living environment. The tribute to the history of Žemaitija [historical Samogitia] is completely understandable. Only later did I learn that Telšiai was so important to Jewish culture as a religious and cultural center. Recently, especially for the 600-year anniversary of the adoption of Christianity by the Žemaitijans, many new works and symbols of historical memory have been created in Telšiai. This includes my contribution as well. I think this background has served to demonstrate the lack of sufficient attention to the fate of the Jewish legacy and heritage. Therefore I as an artist feel the pangs of conscience and the duty to celebrate the Jewish cultural and religious heritage, undeservedly forgotten but very significant for the future.

Why in your opinion is it that we often don’t recognize Lithuanian Jewish history as our own? What have we lost by rejecting it?

The Lithuanian nation is small, it has always been influenced by the cultures of other, larger nations, Poles, Russians and so on. So exaggerated fears of losing our identity are partially understandable. It is very unfortunate, the elimination of a portion of Litvak culture has greatly impoverished Lithuanian culture. It is sad because we could have been proud of a great many people of note in the world of Litvak origins.

Why do you think the public’s view of Jews and Jewishness is so often negative? Is it that Lithuanians lack tolerance generally for people of other ethnicities?

I think the reason for all expressions of intolerance is darkness and lack of knowledge, especially in the realm of theology. Sayings such as “Lithuania is the Land of Mary” and “the Jews crucified Christ” testify to the level of that ignorance. The Telz Jewish community lived a rather separate life. High-level theological studies took place in the yeshiva environment, perhaps not always comprehensible to the surrouding local community. This, perhaps, increased the isolation of the communities. States which passed through the Reformation are remarkably more tolerant. Deeper studies of Holy Scripture facilitate greater understanding of the intimate connection between Judaism and Christianity. I think our entry to the European Union provided us with the opportunity of becoming a more open society and thus more tolerant. The other reason for the lack of trust is that Lithuania experienced many painful occupations which were often associated with the arrival of “strangers,” or people of other ethnicities.

What kind of reaction, what sort of feedback are you expecting in presenting works on the Jewish history of the Telšiai region and the tragedy of their people?

I am an artist and a teacher, and I believe the kind of future we will have depends upon how we raise the young people, how we form their attitudes and views, and what understanding we impart to them of phenomena and relationships. I am a Christian, the backbone of my worldview and creative work is the Bible, which has helped me to understand better the problem we are discussing now. Bible studies, especially of the Old Testament, aids in finding answers to the questions which arise in life and creative work: who are these Jews, where are they from and how did they get to Telšiai, and what are they doing here? What is a yeshiva, what is Yavne, and finally, what is the Holocaust? And so on. I said intolerance, and the consequences arising from it, is darkness. So I am hoping for at least a little light from my creative work. I also hope that the young people studying at the academy in Telšiai will learn a little something about the region in which they reside.

In your Telz collection of twenty shaped metal objects you show the connection between Christianity and Judaism. Do you think dialogue is extremely important between these two religions, these separate communities?

I worked on the Telz project for two years. In selecting material and analyzing the relationship between the communities, I experienced and understood the consequences of a lack of communication and relationships, and I perceive this lack especially against the backdrop of contemporary world events, and I perceived a meaning in this for my work.

[photo caption:] A commemorative marker for the former Telšiai Jewish community on the City Well.

You created a strange ad impressive memorial plaque which now commemorates the memory of women and girls buried in the Rainiai Forest. How was the idea for this unusual invention born?

The Yavne Girls Gymnasium occupied an important place in the Telšiai Jewish educational system and was known for the high quality of the education it provided, especially theological studies. It so happened that the majority of the girls, woman 30 and under, who were murdered in the Rainiai Forest were students and graduates of Yavne gymnasium. So I made a commemorative marker on the building which formerly housed the Yavne gymnasium, a metal relief testifying to the existence of the school and the tragic fate of its students.

Are you planning more memorial plaques and other art objects, and to which events and personalities of Telšiai will they be dedicated?

Currently I’m engaged in a projected called “Sculptural Shaped Metal Work Commemorating the Most Significant Buildings of the Former Jewish Community.” The Ministry of Culture has allocated a grant in support of this. Besides the one I mentioned, the one on the Yavne gymnasium building, I have installed a new relief plaque on the City Well, this is a new, small architectural construction in the Old Town, dedicated to the memory of the Jewish community with a nostalgic text by the poet Zvi Brik on “my town which no longer exists.” Currently I am planning to make a temporary conceptual work on the window of the former Yavne gymnasium. Temporary, because the building is supposed to be renovated. And then it will be permanent. And this year I am planning another to commemorate the community, but the venue hasn’t been completely settled and the idea isn’t complete yet. I want to commemorate notable public figures in the future. Lithuanian Jewish Community chair Faina Kukliansky has offered to help me find information about them.

Where can those interested find your works commemorating the Telšiai Jewish community?

I have created twenty shaped metal objects to commemorate the Jewish community which are almost all on display at the Tolerance Center in Vilnius. In Telšiai, besides Yavne and the City Well already mentioned, there are also three portrait relief miniatures with the symbol of the “Eternal Jew”: on the former “soldiers” synagogue [Aukštoji street no. 3 in Telšiai], on the yeshiva building [Iždinės street no. 11] and on the Maxima Shopping Center building in Market Square.

You have shown your work in Israel. How was it received, what sort of reaction did you get?

In 2005 I participated in an international medals competition in Israel called “H. K. Andersen at 200” where I won the main prize. So I was invited to Tel Aviv. During the awards ceremony a short film about the Telz project was shown, and I showed the same material at the Basis School of Sculpture in Tel Aviv. The reaction seemed favorable.

Your wife Zita is also involved in preserving the heritage of the Telšiai Jewish community and Vilnius Art Academy students are also involved in different projects. Tell us more about this activity and the most memorable projects.

Mrs. Isabel Rozenbaum has come to Telšiai from New York several times—her mother studied at the Yavne Girls Gymansium—and is doing a project with the pupils at the V. Borusevičiaus Gymaniusm in Telšiai called “Bat Kama At? How Old Are You?” This project is aimed at commemorating the 500 girls murdered. Mrs. Rozenbaum asked the faculty of the Vilnius Art Academy to contribute to this project. My wife Zita and her students—clothing and sewing students—responded to this call, and the students made textile works based on this theme. The students’ works were exhibited at several locations in Telšiai. Later my metal arts students joined in on the project and came up with interesting shaped-metal and jewelry creations which were also presented to the Telšiai public.

What role do you think education plays in preserving the cultures of other ethnicities and in the recognition of other cultures? What do you think about projects to encourage tolerance among young people such as the Bagel Shop project?

I think education is the most important factor in inculcating the value of tolerance. Learning the continuity of historical memory has to happen in each generation. We have to learn about the consequences of hatred, which the older generation experienced. Young people are interested in their ethnic heritage and study culture, but sometimes pseudo-scientists and pseudo-researchers appear who make efforts to divide people by sowing ethnic and religious discord, by accusing others of destroying “our ethnos.” So I am very happy about and encouraged and impressed by your Bagel Shop project to encourage tolerance among young people.

Thank you for your words. 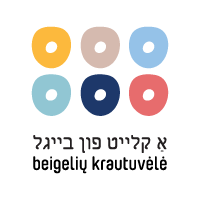