As Litvaks resident and formerly resident in Vilna well know, the Vilna ghetto had its own library.

Located on what was then Strashun and now Žemaitijos street in the Vilna Old Town, the library, called the Mefítsey Haskóle (or Mefitsey Haskolo in Ashkenazic Hebrew), existed prior to the establishment of the ghetto near the historic Jewish quarter, from about 1921. The street name seems to have been a source of confusion because of the “real” Strashun library located within the Great Synagogue, whose collections were largely bequeathed by a Mr. Strashun.

Most of what we know went on in the Vilna ghetto that doesn’t come from the very few survivors, we know from the scrupulous diary kept by the Vilna ghetto librarian, the Polish refugee Herman Kruk. Kruk’s diary is longer than DeFoe’s “Journal of the Plague Year” and just as gruesome, if not more so, since the agent of the great death was not the plague, but our fellow man. 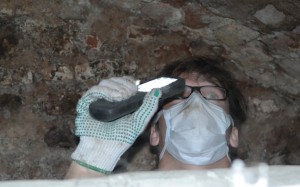 One of the people who volunteered to work in the library was Rachel Margolis, a survivor and Jewish partisan who has written about it extensively, including how Kruk looked the other way initially when she and her fellow FPO soldiers used the basement of the library to test-fire weapons smuggled in.

When Kruk, Sutzkever, Kaczerginski and others were put to work by Rosenberg to raid Vilna’s judaica treasures for the Third Reich, fate had a trick up her sleeve. Most of what they saved, “the good stuff,” was hidden in the ghetto to preserve it for future generations, and most of it was destroyed when German troops and local collaborators “liquidated” the Vilna ghetto. The bad stuff, the trifles and dime-a-dozen items, were handed over to the Nazis who sent it on by train to their homeland, and where it was seized by the US Army near Frankfurt in 1945 and 1947. This “bad stuff” was subsequently repatriated to the Lithuanian Soviet Socialist Republic, and the current incarnation of YIVO, originally based in Vilna and a rich site for looting by Kruk and the others recruited for the Rosenberg Task Force, has all but sold its soul to the Lithuanian company store to regain access to it.

The library building itself escaped destruction, despite being located on the one street in the ghetto where the armed factions actually fired on invading Estonian SS troops during liquidation.

From 1944 to 1948 the library was the Jewish Museum in Vilna. Later the space was used as a branch of the Vilnius Musical Conservatory, until about 1999.

Since then it has been mostly collecting dust, but was the venue for a “naming the names” Holocaust commemoration ceremony in 2013. Part of the same project was putting up posters of black-and-white photographs discovered in the ruins of Vilna ghetto pasted on walls in the immediate vicinity around the library, at the end of what is now Žemaitijos street just before it hits Pylimo street.

Organizers of the Names ceremony say it is “an open civic initiative born in Vilnius in 2011 to commemorate Holocaust victims and to help to revive our collective memory.”

The second week in August saw a new initiative to both reclaim the site from the dust, cobwebs and debris, garbage and old broken furniture left behind from the Vilnius Musical Conservatory as an important Jewish Vilna heritage site. 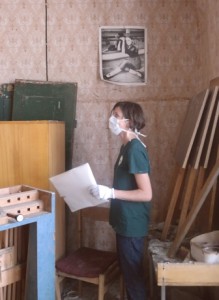 Milda Jakulytė-Vasil, historian, Vilna Gaon Jewish State Museum employee and author of the Lithuanian Holocaust Atlas, was one of the organizers of the call for volunteers which went out over facebook and other social media.

Several mainly young Vilniusites, young men and women, heeded that call, and spent three hours on the afternoon of August 11 getting their hands (and clothes and hair) dirty.

Volunteers first hauled out the detritus of accumulated broken furniture and out to the trash heap, and then got to work with gloves and rags to clear away at least some of the cobwebs.

After tackling the first floor, they got up into the attic, under the eaves and even crawled down into the basement area where Margolis and her fellow FPO soldiers once used to target-practice. 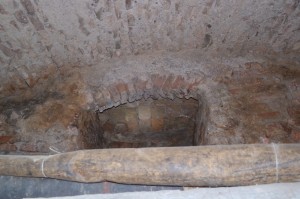 The basement where the FPO likely once trained in secret

“It was important to me and my colleagues to make sure this site doesn’t remain forgotten. Last year the reading of the names and the photographic exhibit outside attracted some interest. Both residents and travelers alike, as they walk this street, may stop when their eyes meet these photographs, and read some short information about this building. That’s not enough to really bring attention to bear on this historical building, of course.

Our hope is to set up a Holocaust museum there. So far it’s only a dream, though. Until we are able to accomplish such great things, we want this building to come back to life as a space for events and exhibits. This year will be the fourth for the reading of the names. Although the reading will take place elsewhere, there will be at least one event held in the building this fall,” Milda Jakulytė-Vasil said mysteriously. 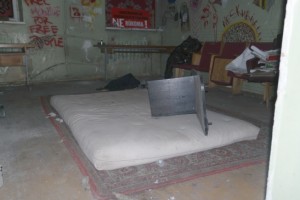 Sebastian Hager, an Austrian who is just completing his mandatory military service in Austria’s alternative service agency for commemorating the Holocaust and who has been working at Lithuania’s only Holocaust museum for the last year, said half of the small number who turned out to pitch in were affiliated with the museum and the other half were young locals. He said it appeared anarchists had been squatting the building in the recent past and had set up a comfortable room for themselves there with couches and a bed. He also said there were a large number of books left lying around, mostly in Lithuanian, Russian and German, but not from ghetto library era and mostly about literature studies. He knew about FPO training in the basement, but said there were no traces left of library or FPO activities as far as he could tell.

Sebastian Hager and other volunteers brushing the spiderwebs off their clothes

Milda Jakulytė-Vasil said she wasn’t sure whether they’d issue a new call for volunteers at the ghetto library any time soon, but added volunteers might be needed for the Names project this year, both to read the names and organize events. If you’re interested and available, contact her via the facebook page 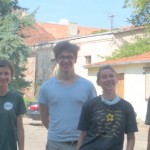 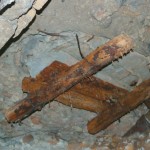 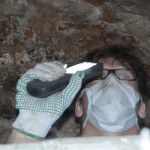 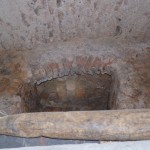 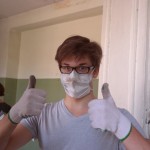 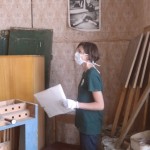 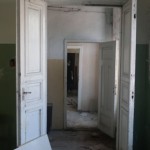 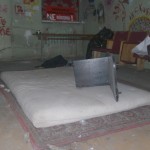 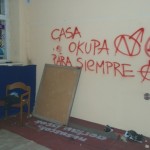