The German Makkabi Games 2021 took place in Dusseldorf from September 2 to 5 and athletes from the Lithuanian Makabi Athletics Club took part. Over 600 athletes were there to compete from Germany, Lithuania, Austria, the Netherlands, Poland and other countries. 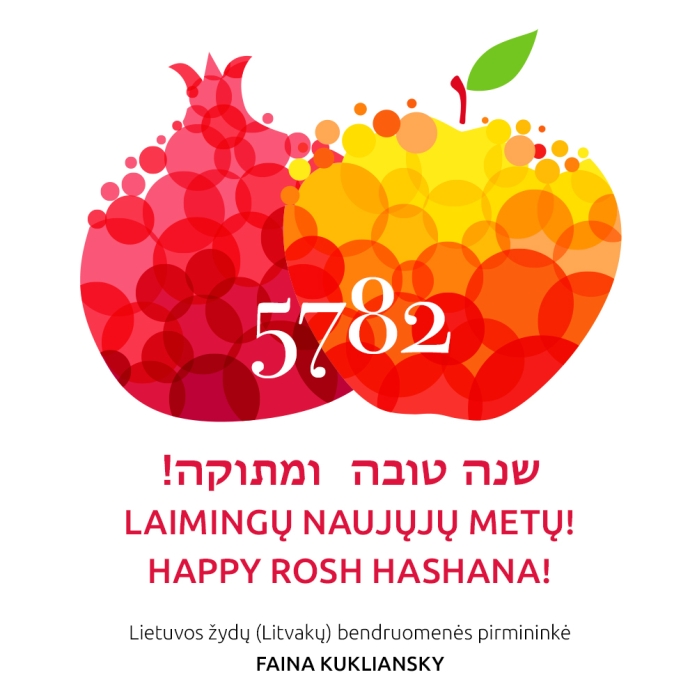 Greetings on the September 1 holiday. We wish you perseverance is seeking the heights of learning while remaining endlessly creative.

No man on earth is truly free. All are slaves of money or necessity. Public opinion or fear of prosecution forces each one, against his conscience, to conform. A man’s most valuable trait is a judicious sense of what not to believe. Question everything, learn something, answer nothing. Whoso neglects learning in his youth loses the past and is dead for the future.

On June 23, 1921, the first Jewish athletics league Makabi began operating, giving rise to the Jewish athletics movement in Šiauliai. In 2021 the Šiauliai Jewish sports association Makabi is celebrating its 100th birthday. To mark the milestone year, the Šiauliai Regional Jewish Community, the Aušra Museum and the Gegužių pre-gymnasium in Šiauliai carried out a project in May and June of this year called “Sport: An Indivisible Part of Life of the Successful Person.”

On May 25 the young chess players from the area competed in a virtual chess championship, organized by the Community and local Makabi Club chairman Eduard Šer. Nine teams from eight local schools competed. Aušra Museum historian Antanas Jankūnas shared interesting facts about sports in Šiauliai before the matches began.

On June 9 a large gathering of local students attended a virtual event to celebrate Šiauliai Makabi’s 100th birthday. The students learned the story of athletics in Šiauliai from historian Antanas Jankūnas and took part in a quiz about sports.

The members and staff of the Lithuanian Jewish Community are pleased to congratulate Faina Kukliansky on her re-election as chairwoman of the LJC.

Although the celebration was scheduled to being at 7:00 P.M., invited guests began gathering earlier outside the building. Attendees were dressed in their finest and displayed a festive mood. Snapshots from the event are available here.

Union of Former Concentration Camp Prisoners member Sulamita Lev celebrates her birthday June 7. She has been an employee of and volunteer at the Lithuanian Jewish Community and the LJC Social Center for many years.

We wish her a happy birthday, much happiness and good health, strength of spirit and joy. We wish you many meaningful years to come and that you would always remain as you are, young at heart.

The newspaper Šiaulių Kraštas published the incredible story of Sulamit’s life and rescue from the Šiauliai ghetto two years ago. The text is available in Lithuanian here.

The Lithuanian Jewish Community congratulates Rūta Ribinskaitė for successfully defending and taking first place among final works for earning a bachelor’s degree at the International Relations and Political Science Institute of Vilnius University. Her work was titled “(Un)Fading Stereotypical Images of Jews: A Qualitative Analysis of the Internet News Site Delfi.lt.”

She told us: “Thank you for the opportunity to connect with the Jewish community, to acquire a lot of information, to gain experience and get to know members of the community, which led to my successful completion of studies.”

Happy birthday to Israeli ambassador to Lithuania Yossi Avni-Levy. Here are some archive pictures of his first visit to LJC headquarters.

Happy birthday to Fania Brantsovskaya, our living link with former Lithuania before the Holocaust. A Jewish partisan, she kept fighting after the war, educating generations about the truth of what happened. Most of us at a certain age in adulthood begin to slow down, to rise more slowly from our chairs, to walk more cautiously. Fania never did. She still walks with a spring in her step as if she were a teenager, with a smile for everyone and ready to talk to anyone without regard for social status. Happy birthday, Fania. Mazl tov! Bis 120!

As Jews prepare for the Sabbath this Friday, blessing the wine and the end of the week with prayer, we would like to bless Israel with a more peaceful situation as a cease-fire comes into effect after 11 days of thousands of rockets raining down from the Gaza Strip. We will light candles and say a blessing for Israelis to hold peace and a peaceful life dear. Shabat shalom!

“What we are depends on what the Sabbath is to us. The law of the Sabbath day is in the life of the spirit what the law of gravitation is in nature” Rabbi Abraham Joshua Heschel (1907-1972) writes on page 89 in his book “The Sabbath” (1951).

Greetings on Shavuos (Shavuot) or the Feast of Weeks with an educational video in Lithuanian about the holiday.

Members of the Šiauliai Regional Jewish Community remembered the victims of World War II on May 9. Thank you to all the heroes who fought the Nazis from 1939 to 1945 for the sake of freedom and peace, for our future and for the opportunity given us today to take joy in each new day.