You speak up, you receive a warning. That’s what happened to a Center for the Study of the Genocide and Resistance of Residents of Lithuania (Genocide Center) historian who openly criticized the current situation there. The director of Genocide Center says the warning was issued because of unprofessional behavior.

LRT.lt reminds readers we have written before about doubts expressed by Genocide Center employees regarding attempts to politicize the Center’s activities as well as regarding the decision to present the status of freedom fighter to deputy general director Vidmantas Valiušaitis. Now it turns out historian Mingailė Jurkutė has received an official warning for publicly airing her concerns.

Received Letter from Advisor to the Director

Historian Monika Kareniauskaitė who no longer works at the Center shared a post on social media Thursday saying she still thinks the Center is one of the institutions working in the field of memory studies with the greatest potential. Nonetheless, she observed problems and poor practices which didn’t affect her alone. Kareniauskaitė said if she had been only one to suffer in this situation, she would’ve kept silent, but her colleagues were coming up against the same things.

“When I found out my former colleagues working at the Center, people I consider great historians, were receiving the same sort of pressure and even official warnings, I thought it was important to share my experience as well. So, regarding the true reasons for my leaving work at the Center: I received perhaps indirect threats of work-place sanctions, a downward reassessment of my professional competence, slander and gossip, and possibly pressure,” Monika Kareniauskaitė said on social media.

She wrote that the situation which caused her problems was connected with Center advisor to the general director Vidmantas Valiušaitis. She said she hadn’t said anything about Valiušaitis publicly, didn’t have any prejudgments about him and even participated in a discussion he moderated.

She wrote she had made statements on Valiušaitis twice, the first time following his negative comment about the Center and the second when she issued a positive statement to LRT regarding the assignment of status of freedom fighter to Valiušaitis. Beyond that, she began to doubt Valiušaitis’s competence following internal Center discussions on the June Uprising and armed resistance. She wrote she also understood that internal criticism wouldn’t be heard or taking into consideration by the Center leadership. 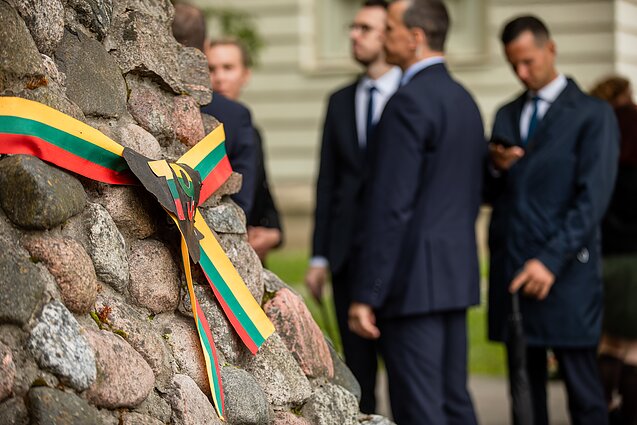 Monika Kareniauskaitė said that after she commented to LRT on Valiušaitis receiving the status of freedom fighter, she received a letter from him which allegedly threatened to pressure her immediate bosses to undertake punitive measures against her. She decided to leave her job at the Center because of that letter.

“Actually that letter said I don’t have the right to comment at all upon the work of the Resistors Rights Commission. It’s interesting why: the RRC, as it itself claims, is independent in its work and doesn’t answer to the Center. It does research and dispenses the status of freedom fighter and other legal statuses on its own without the involvement of the Center, and operates as an independent unit. Therefore presenting that status to Valiušaitis, according to the Resistors Rights Commission, is not an abuse of public office by Valiušaitis. So, if the commission operates independently of the Center, why aren’t Center historians allowed to comment upon its work and decisions?

“Unfortunately, the threats against my colleague M. Jurkutė became flesh: for her comments in an LRT article and on her personal facebook page, she received a work-place penalty (a warning-LRT.lt), and if she received a second, she would be terminated. This is how the Center leadership shuts up all criticism; internally it isn’t heard, and externally, just try it, but you will be punished or fired,” Kareniauskaitė said.

LRT asked Center director Adas Jakubauskas about the warning issued to his employee. In a written response, he said he had formed a commission which found M. Jurkutė had failed to bring up her questions and doubts internally with the Center leadership, and instead spoke publicly about them. The Center director said as well the historian in unethically judging Valiušaitis had violated the principles of objectivity and fairness [in Lithuanian administrative law–trans.].

“The commission felt M. Jurkutė through these actions of hers had publicly criticized without foundation her colleagues, harmed the Center’s reputation and violated the Center’s internal rules of order as confirmed by the directive of the general director of the Center in 2015. … The commission recommended issuing a warning to M. Jurkutė,” Jakubauskas wrote in his reply. 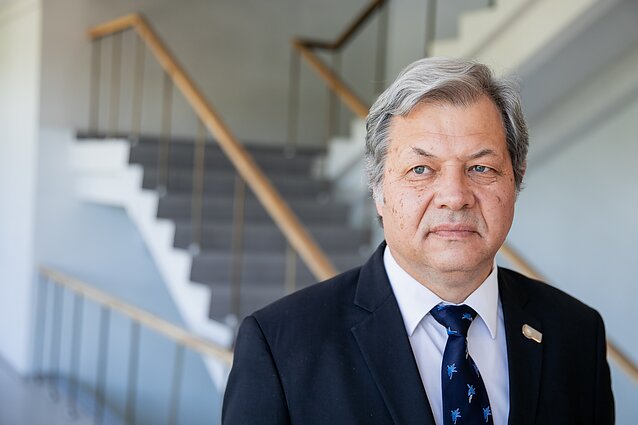 He also said the internal rules which he claims Jurkutė violated were instituted by his predecessor in the post.

Center researchers sent an appeal to the speaker of parliament, the parliament’s Human Rights Committee and its Education and Science Committee, and to the Center’s general director.

We are concerned by:

1. The devaluation of the discipline of history through the distortion of history research in an ideologized and politicized direction (encouragement to undertake “the defense of history” and “memory wars,” the public announcement of irresponsible and unobjective statements and interviews in the Center’s name, for example, URL; the halting of research for calculating damages to Lithuania incurred by the occupation by the USSR, and so on);

the devaluation throughout the Center’s activities of the status and significance of fundamental historical research, the flawed idea of the adaptation of research and results sought (for example, commemorative programs being drafted without consulting history and heritage protection experts, without regard to current academic research);

2. Genocide and Resistance Research Department (GRRD) staff and directors are only invited to a portion of meetings which consider strategic plans and other important issues of Center activity. Without the knowledge and consent of historians, without the participation or knowledge of the GRRD director and department heads, structural reforms and changes of leadership are planned. The parliamentary Committee on Battles for Freedom and State Historical Memory is being informed of planned changes circumventing the leadership of the GRRD which only learns of these plans from open sources [media] (see the minutes of the meeting of the Committee on Battles for Freedom and State Historical Memory for January 6, 2021, at 1:34:22, https://www.youtube.com/watch?v=e_adAN5Mu44 )

3. The appointment to senior advisor to the general director through the creation of a new post and the introduction of new job requirements tailored especially to fit this person, introducing the requirement of a degree (philology) which has nothing to do with the work of the Center. This post has been given wide authority to consult and judge the work of history professionals, to set the direction of the Center’s research, and to oversee the work of the Center’s publications department with power over the department directors and the heads of subsections (http://www.genocid.lt/UserFiles/File/Pareiginiai/Direkcija/Vidmantas_Valiusaitis.pdf);

4. Due to the devaluation of professional competence, the strained and emotional work environment and pressure from the Center’s leadership, qualified, experienced history and other professionals continue to leave or be pressured by the Center, employees who have contributed significantly to the Center’s activities over many years. Monika Kareniauskaitė and architect professor Algis Vyšniūnas have quit their jobs because of the threat of work-place sanctions and their experiences in raising the issue of problems at the Center; Mingailė Jurkutė has been issued a stark warning for violating workplace rules in expressing very well her professional opinion to the media regarding the status of freedom fighter issued to a certain person (and this is why the staff who have signed this appeal are concerned that constructive criticism will be equated with disloyalty). The lack of foundation for that warning is also demonstrated by the fact new internal rules of order were adopted hastily by the Center following the appearance of her comments (XIII Part 2 Provision of Public Information) which, post factum, introduced the duty upon academics working at the Center to seek and receive permission to speak with reporters. These sorts of restrictions violate the right to criticize the activities of state institutions and agencies (Lithuanian Law on the Provision of Public Information, article 9), academic freedom (Lithuanian Law on Science and Research, article 53, section 2, points 1 and 3) and principle of openness of academic research (Lithuanian Law on Science and Research, article 3, section 1, points 1 and 4) (http://genocid.lt/UserFiles/File/dokumentai/2020_vidaus_tvarkos_taisykles.pdf);

This situation hinders the successful implementation of the functions assigned to the Center, and without remedying them, there is the threat of the following:

1. The disappearance of the line between expert professional work and amateur initiatives, both in history research as well as in the field of commemoration and the drafting and publishing of documents, with the risk of it becoming an imitation of expert work and a profaning of academic research. This situation is useful to forces inimical to Lithuania who question the legitimacy of research into the past.

2. A further strengthening of political control, restricting independence of academic inquiry and lowering the quality of academic research.

3. The disappearance of the Center’s reputation as a competent expert agency in the national and international realm.

4. The appearance of alternative expert agencies in Lithuania providing expert professionals (including a large number of qualified staff who have quit the Center) who can carry out the functions which the Center finds too burdensome, or the removal of research problems from the Center to other institutions.

In light of the above-described complicated and multifaceted situation and the dangers posed, it is necessary to take steps to initiate needed administrative reforms which would return to the institution its reputation for research and expertise. We recommend:

1. Forming a working group of history specialists which would include historians working at the Center and other Lithuanian historians and memorial policy experts, which would engage in renewing the direction of the Center’s research, discuss urgent methodological problems and approaches and create new and confirm existing research programs (Mingailė Jurkutė made this suggestion at a teaching seminar for staff in the fall of 2020). We recommend adding to this working group foreign specialists (this suggestion was made by Monika Kareniauskaitė, proposing to add colleagues from the European Memory and Conscience Platform, Yale University, and memory centers in Germany, Hungary and Estonia).

2. To set up a Research Council under the Center which would invite in academic authorities who understand the field (this recommendation was expressed at a meeting of GRRD staff and the Center’s general director previously).

3. To return to full meetings of the Board of Executives of the Center (this suggestion was made numerous times by GRRD director Arūnas Bubnys).

4. To review the job description for the post of senior advisor to the general director and to re-assess the need for this post and its usefulness to the Center’s activities. If this post is nonetheless necessary, we believe qualification requirements for it should include things such as professional competency and authority in the field in which the Center operates, and that the authorizations granted to this post would insure the participation of department heads in adopting decisions which affect those departments.