The Fifth World Litvak Conference is taking place from May 23 to May 26.

Registration has been closed for the opening ceremony at the Lithuanian parliament. If you want to register for the other events concluding on Sunday evening, register now.

The registration form is here.

“Cvi in the Park” is once again welcoming the citizens of Vilnius and city’s guests! The project was set up during the corona virus pandemic in order to continue the operation of the famous Bagel Shop Café under strict government-imposed restrictions. This is how the new open-air café “Cvi in the Park” was born, which is now reopening for the summer season.

The word “cvi” or “tzvi” itself means “doe” in Hebrew and given the divisive history of the square and the surrounding atmosphere of the park, it was decided to accommodate this “doe” in Cvirka Square, for the sake of dialogue and tolerance. We hope that this revived summer tradition will give a fresh face to this old square in front of the Lithuanian Jewish Community. We are ready to be a reliable partner to the Vilnius city municipality in the creation and development of a distinctive, sustainable identity for Cvirka Square.

At “Cvi in the Park” we offer healthy Israeli street food such as falafels, hummus, pita, etc., together with fresh vegetables grown locally and a unique blend of Middle Eastern spices and chickpeas. The menu is vegan-friendly and all organic ingredients are carefully selected based on seasonality. We hope our visitors will also enjoy the new and unique flavors of plant-based food. We are very happy to be cooperating with the craft beer experts Genys Brewing and true wine lovers New Skanu.

Lag ba’Omer is a minor Jewish holiday celebrated with bonfires and an occasion for weddings and cutting children’s hair. It happens approximately one month after Passover, and the name means the 33rd day of the of the Omer count, on the 18th day of the Jewish month of Iyar, which is about the midpoint in time between Passover and Shavuot.

Lag ba’Omer, according to tradition, was the day on which the plague that killed 24,000 of Rabbi Akiva’s disciples stopped (Yebamoth, 62:72). For this reason it is customary to cease mourning customs of the Omer period, which include prohibition of marriages, cutting hair, and public expressions of joy such as singing and dancing. Some traditions hold that the period of mourning ends at Lag ba’Omer and others end it three days before the holiday of Shavuot.

The Pylimo Gallery located at Pylimo street no. 30 in Vilnius is to host an exhibit of paintings by Solomon Teitelbaum called “Prayer to a Seagull” starting May 17. The exhibition will run till June 4.

Full description in Lithuanian available at the gallery’s website here.

The Kaunas Jewish Community invites you to the unveiling of a plaque commemorating Dr. Isaac Levitan, the “angel in a white lab coat,” at 3:00 P.M. on May 19 at the doctor’s former address, Miško street no. 27 in Kaunas.

This is where Levitan set up his first private clinic in 1926. It quickly became known as Dr. Levitan’s Women’s Clinic. Amazingly, the building has stood unchanged since that time. It now houses the Christian Healing House which has delivered a large number of babies over several generations in Kaunas.

The doctor’s family didn’t fare as well during World War II. His son (also a doctor and gynecologist) and daughter-in-law were murdered in the Kaunas ghetto. Levitan, Sr., and his wife were deported by the Soviets twice. He died in exile in Krasnoyarsk oblast in 1956. His grandson Uri after many journeys finally ended up in Israel, thanks to fearless people.

The following is the program of events for the Fifth World Litvak Congress to be held in Vilnius from May 23 to May 26, 2022.

A PDF file of the program can be downloaded here.

Events Program for the Fifth World Litvak Congress in Vilnius

The Lithuanian Jewish Community invites Litvaks living around the world to return to Vilnius May 23 to May 26, to visit the land of our ancestors and to attend the Fifth World Litvak Congress.

The Vilnius Jerusalem of Lithuania Jewish Community presents a solo concert by the pianist Golda Vainberg-Tatz to be held at 6:30 on Thursday, May 12, on the third floor of the Lithuanian Jewish Community in Vilnius. She will perform works by Bach, Beethoven and Chopin. The event is free and everyone is invited.

The Lithuanian Jewish Community is inviting Litvaks from around the world to come to Vilnius from May 23 to May 26, to visit the land of their ancestors and to take part in the Fifth World Litvak Congress. The four-day congress has a program which includes discussions, tours of historical sites and different cultural activities dedicated to Jewish heritage in Lithuania and achievements by Litvaks on the world stage.

Events include the opening at the Lithuanian parliament and a concert by American cantor and professor Joseph Malovany at the Choral Synagogue in Vilnius in an evening of concerts called “A Date with Vilne” which will include Lithuanian musicians and actors paying homage to the memory of the Jews who lived and worked in Lithuania.

Lithuanian parliamentary speaker Viktorija Čmilytė-Nielsen is the official patron of the Fifth World Litvak Congress. She said: “This Litvak Congress is happening while aggression is running wild in the Ukraine, when war fever has infected the entire region, which is significant to Lithuania historically and today, and to the entire world of Yiddish culture. In the face of blind brutality and violence it is always important to emphasize humanitarianism, empathy, the highest spiritual values from which the long Litvak tradition has always taken strength. This is especially urgent today when in the east of Europe an aggressive and imperialistic anti-Semitism has again raised its head, distorting historical facts and manipulating peoples’ emotions. We must oppose this.”

The major state ceremony for Yom haAtzmaut takes place on the eve of Yom haAtzmaut at Mount Herzl, Israel’s National Ceremony in Jerusalem. This event marks the end of Yom haZikaron (Israel’s memorial day, which falls immediately before), and the beginning of the celebration for Yom haAtzmaut. The ceremony involves performances, speeches, and a ceremonial lighting of twelve torches which symbolizes the Twelve Tribes of Israel by twelve citizens who have made a great impact on the country. At the same time, towns and cities across the country have parties and firework displays. 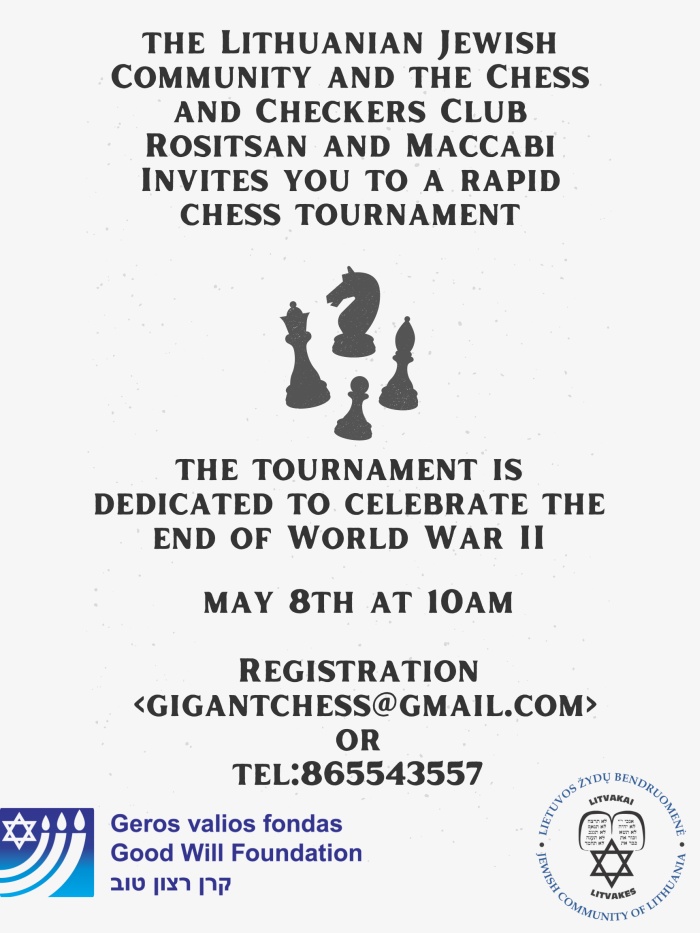 Ruth Leiserowitz, an historian from Germany, has researched the dramatic forced migration out of Klaipėda, also known as Memel, before World War II. She will present her newest book on the subject called “Žydai Klaipėdoje (Mėmelyje)” [Jews in Klaipėda (Memel)] at the Ieva Simonaitytė Public Library in Klaipėda at 5:00 P.M. on April 29.

The publication is intended to coincide with the 770th birthday of the port city.

Leiserowitz’s father came from Memel and she worked at Klaipėda University after Lithuanian independence, and helped organize the Thomas Mann festival in Nida, Lithuania. She got interested in her research topic because of her Jewish father-in-law who was born in Šilutė, then known as Heydekrug. In 1923 his family left Memelland when it was annexed by Lithuania. She decided to look into the fate of Jewish families forced to leave the region. She says her research is often something like a detective novel.

The Lithuanian Jewish Community invites you to mark the day with us and to remember the victims of the Holocaust together. You are invited to attend a commemorative ceremony at the Ponar Memorial Complex outside Vilnius at 12 noon. Those needing transportation will be able to catch a bus there and back from the LJC at Pylimo street no. 4 in Vilnius. Passengers must register by sending an email to office@lzb.lt or by calling 868506900. The bus leaves the LJC at 11:00 A.M. sharp on Thursday, April 28.

The Lithuanian Jewish Community is pleased to announce the ping-pong or table tennis program for children and adults will continue. Adults are invited to attend and play between 2:00 and 4:00 P.M. on Sundays at the LJC, and weekdays from 5:00 to 8:00 P.M. at the Simonas Dauklantas pre-gymnasium in Vilnius. Children and adolescents are invited to meet Mondays and Tuesdays at the Sholem Aleichem ORT gymnasium with 1st to 4th grades from 3:00 to 4:00 P.M. and 5th to 12th-graders from 4:00 to 5:00 P.M. For more information contact the trainers, Neta Alon at 862957005 or Rafael Gimelštein at 866283856.

The Šiauliai Regional Jewish Community will hold their 12th annual Liova Taicas athletics tournament at the Uniqa Arena there starting at 11:00 A.M. on Sunday, May 8. The games are to include indoor soccer, 3-on-3 basketball, volleyball, squash, table tennis and chess. For more information call Rašella at 869910621 or Sania at 864025950.